Students who attend these courses will explore Rochester’s flexible curriculum by selecting classes they’re most passionate about. Students can choose one course per session, from fields like the Humanities, Engineering, Medicine, Business and other areas that make Rochester unique. Instructors come from all of our 7 schools including the School of Medicine and Dentistry, the School of Nursing, the Warner School of Education, and the Hajim School of Engineering. Students will participate in class discussions, virtual field trips, group projects, experiments in labs, and put new found knowledge to use in creative ways. 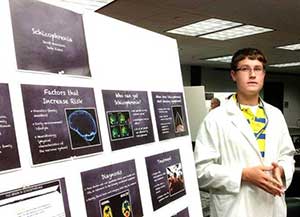 “I was surprised by how much growth my son experienced in just one week. He gained knowledge in the subject area of CSI and that helped him narrow down the areas of study he’s interested in. He made a lot of friends, gained confidence, and is excited for college next year.”

Biomedical Technology: Engineer, Doctor, or Both?

This course teaches you the underlying physiology of crucial human organ systems and the process of recording the biological signals that dictate how they perform. You will learn about vital signs like blood pressure, heart rate, and electrical signals produced by the muscles and heart. You will also learn to interpret and integrate these signals with biological processes and diseases.

Through stimulating lectures, interactive labs, and informative field trips, this class introduces you to the many disciplines of engineering. You will get an overview of the necessary tools for analysis and problem solving and will use your creativity, energy, and interpersonal skills while participating in several design projects. Additionally, you will learn the importance of mathematics, science, and technology in everyday engineering situations. By the end of the course, you will have a better-defined idea of engineering, its requirements, and your options for a future within this field.

GirlsGetMath@Rochester encourages young women to explore, and invites them to excel in, the mathematical sciences. Accomplished professional women enthusiastic about serving as career models as well as scientific mentors lead the program. Potential topics include cryptography, the mathematics of voting, image processing, prime numbers and factoring, and fractals.

What impacts your health? Most would say that hospitals and health care delivery systems have the greatest impact on health, but what if you are never sick? This dynamic and interactive course will explore the multiple ways in which the world around us impacts our health, and the health of patients. We will discuss current events and policy changes including the COVID19 efforts, and the Affordable Care Act. Although this course will be entirely on-line, we are building in many experiences and guest speakers so that students can examine the world around them and share with the class. Planned experiences include a discussion of observation vs. interpretations by examining Art with an expert from the Museum of Art, talking about public health with leaders from the Monroe County Department of Public Health, discussion of policy by watching documentaries such as FED UP examining food regulations and obesity in the US. We will explore the impact that poverty has on health care by using an online simulator. We will discuss current films to think about issues of culture and race. Students will learn about career options beyond medicine that impact the population’s health. This will be a fun, engaging and active time of learning!

Optics isn’t just fascinating, it’s essential to modern science and technology.  You’re already aware of some optics applications, but there are a whole lot more you probably don’t know about… yet!  Making images with a lens is just the tip of the iceberg. We’ll take the mystery – but not the magic – out of some fundamental concepts such as how lenses form images, how light really does act like waves, and how lasers work. Together we’ll explore applications of these concepts, both here in the Rochester lab and through activities you’ll do at home. For example, we’ll demonstrate building an interferometer that uses light to measure distances on the order of nanometers, and investigate polarization to see how 3-D movies are projected! Along the way we’ll interview some world experts on a variety of topics, who will share their excitement about the future of optics. A good understanding of high school geometry is essential to fully participate in this class.

Nursing is the largest workforce in the health care setting. The roles that nurses fulfill in the hospital, public health, research, and advanced practice are vital to the success of a patient’s health. This course will show you what it takes to be a nurse. With engaging discussions and interactive exercises, you will learn about the profession’s foundations and specialties, the history and future of nursing, and potential careers that might interest you. Whether you are interested in clinical research or patient care, come explore if nursing is for you.

The Basics of Investments and Careers in Finance

This class introduces the many disciplines of finance, what to expect during academic training at a university level, and potential career paths. Have you ever wondered what it’s like to be an investment banker, a financial advisor, or a private equity, hedge fund, or real estate investor? Examine the pros and cons of various career paths within the world of finance. Learn about different types of investments, build your own hypothetical investment portfolio, speak with professionals in the industry, and more. This class will also introduce several aspects of personal finance (things we wish we thought about when entering college).

What’s it like to be a physician? What does it take to become a doctor? Meet with practicing physicians, medical students, and other experts. Explore hands-on medical procedures, examine equipment, and discuss medical ethics and the role of the physician. Learn what it takes, academically, to prepare for medical school, and how to decide if medicine is the right path for you. Examine the current pros and cons of being a doctor.

Do you write with your voice? Do you struggle to express your voice in writing? Just as strong speakers who have their ways to draw the audience attention, successful writers also need to develop their voices so that they can hook the readers. This course will explore what is voice in writing? How can our cultural and linguistic backgrounds affect the way we express our voice in writing? How can we develop our unique voice and make it heard in writing?  We will seek out answers to these questions through reading texts in a variety of disciplines (e.g., psychology, sociology, anthropology, and education), watching podcasts and YouTube videos, and writing texts of different genres, including narratives, argumentation, commentaries, and social media postings. This course demonstrates the writing process as crucial to the writing product. Students will do free writing, write reflections, offer peer feedback, and make revisions to develop a voice in writing.

This course examines the social movement that originated among women to combat various forms of sexual misconduct. During the two weeks, students will analyze current events and the cultural debates around the #MeToo movement. This course covers multiple disciplines and will use books, articles, videos, and class discussions to understand the impacts and long term effects. Student will also learn how the movement flourished into an international expansion for justice of marginalized people and communities. Some topics include, the origins of the movement and social media in 2006, the investigation of Harvey Weinstein, the on-going investigation of Britney Spears, Paris Hilton, and others who have brought magnitude to the issue.

What makes a great leader? In this course, we will explore the revolutionary leaders in Latin America and analyze what societal and political issues cause individuals to rise up and create change in their communities. We will learn more about Rigoberta Menchú, Dolores Huerta, Cesar Chavez, and many others that saw  injustice in their countries and became agents of change. Students will learn about history in different regions of Central and South America, and discuss with their peers the common themes of human rights, feminism, and racism throughout these different stories of revolution.

This course will explore how to use ethics as a framework for teaching, with a focus on the mathematics classroom. Students will investigate their own biases, how those biases formed, and how they are enacted in a typical mathematics course. We will answer questions about how mathematics curricula are constructed and aligned with state and national expectations. This course will deconstruct the idea of a “math person” and seek to find areas for crossover into other disciplines. Students will leave this course with a heightened focus on their own motivations for and perceptions of their education.

Mysteries of the Brain and Human Behavior: Psychology’s Understanding of Deviance

If you’ve ever wondered about how human development can ‘go wrong’ – in the brain, in our personality, or in our behavior — then this might be the right class for you. Contemporary psychology includes the study of yet-unsolved mysteries of the brain and human behavior. Despite the research efforts in fields of study including neuroscience, and forensic, developmental, abnormal, and social psychology, society still grapples with understanding those things we categorize as ‘deviance’ from normal – such as disability, criminality, and mental illness. In this class, you can expect to get a brief introduction to the various ways in which researchers have sought to understand disability, criminality, and trauma from an abnormal and social psychology perspective; and, the goal is to challenge your thinking about human differences in ways that you might not have considered before.

We will learn about and discuss controversial and even mysterious psychological phenomena such as: What causes a witness to stand by and watch an old woman being robbed, but do nothing to intervene? Did lobotomies actually work – and is modern medicine really better at treating mental illness than everything that came before it? What are personality disorders? How can we know so much and yet so little about disabilities such as autism? How does fear influence groups of people to do egregious things, like burn women at the stake or be complicit in the Holocaust? How do our traumatic experiences change the brain? Can our brains really ‘play tricks’ on the way we perceive or experience something? How do we define what’s normal, and how can disability studies shift that perspective? In what ways does a brain injury change someone’s personality, leaving them with lifelong cognitive challenges that even neuroscientists can’t explain? What theories have been used to explain criminal behavior and the personalities of people who become murderers?