My name is Madeleine Fordham, I'm from Amherst, Massachusetts. Right now I am planning to double major in American Sign Language and theatre, with clusters in web design and British history. I also do every extracurricular activity I possibly can, including (but not limited to) ASL Club, Debate Union, TOOP, Todd Theatre, Campus Times, and Quidditch—go UR Thestrals!

Disclaimer: I am not a scientist. In fact, this experiment might be the most “science” I have done since arriving at the University of Rochester a year and a half ago. But it was finals week recently, and I decided the best way to honor that (and the best way to procrastinate) was to take an in-depth look at the favorite vice of college students throughout our campus and across the nation: coffee. 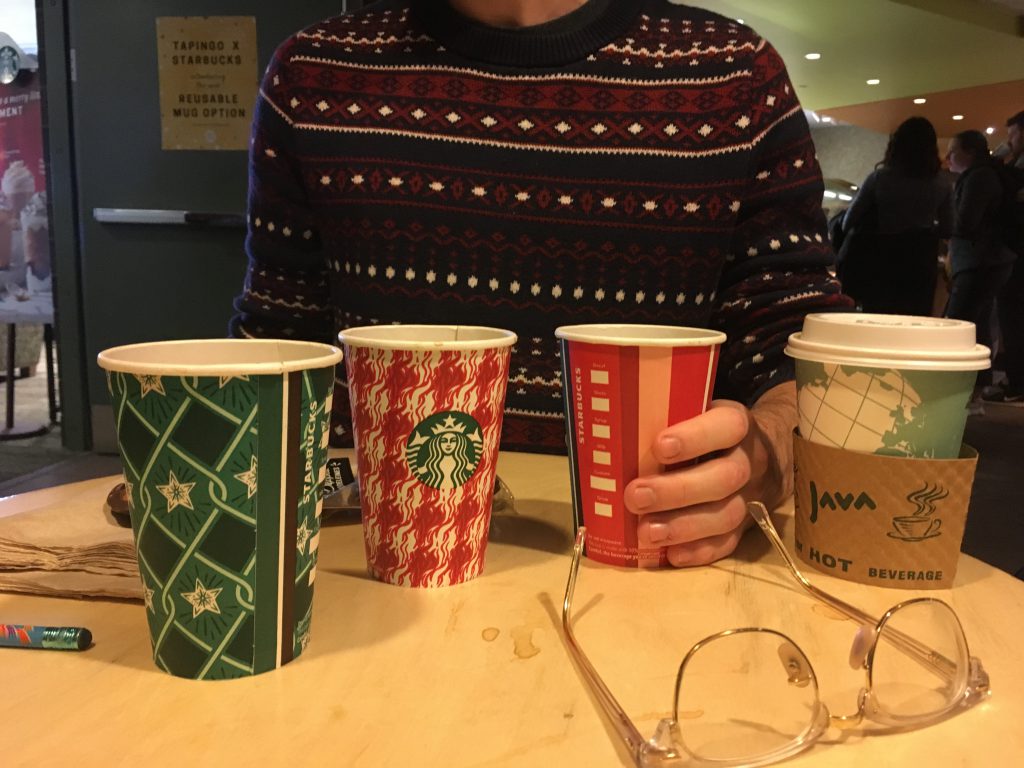 I know not everyone has the same tastes in coffee, so I enlisted two of my friends to help me in this taste testing venture: Dan, a junior double majoring in environmental science and international relations, and Shawn, a sophomore triple majoring in linguistics, brain and cognitive sciences, and music. They also both work as RAs for first-year housing, as well as being in on the executive boards of one of our a cappella groups. If anyway was qualified to judge (and in desperate need of) caffeine, these two were.

In order to control the variables as best I could, I had another friend (thanks Britney) pick up a simple black coffee at three locations: Starbucks, Connections, and Pete’s. If a roast choice was presented, I had her choose whatever the “roast of the day” was. In the interest of full disclosure and journalistic integrity, I did have her add milk to all coffees, because even with the ever increasing approach of finals, I will not stoop low enough to drink my coffee black. She poured each of the coffees into a Starbucks cup (we couldn’t find plain white ones), and secretly labeled each one so we would be able to tell which was which when the time came.

Now on to the deliberations.

Cup A: It was pretty unremarkable. It did taste a little burnt, and subsequently left a bitter aftertaste that was hard to swallow (literally and figuratively). Shawn did approve of its “nutty flavor,” but the highest praise Dan could give was that it was “pretty drinkable.” Not exactly a rave review. Overall, it was pretty smooth—I could down a few of these while pouring over a textbook without blinking an eye.

Cup B: Dan and Shawn thought that Cup B tasted less heavily roasted, and therefore less burnt, but to me this was the one with the worst aftertaste, a kind of acidic flavor that lingered in the back of my throat. Yuck. I would give it a low rating, but my friends approved of its more intense flavor. I guess it depends on what you’re going for, so to each their own.

Cup C: The three of us agreed that it had the least flavor overall, although we argued about whether that made it better or worse than the others. Since I’m mostly here for the caffeine, I just care about how easy I can chug one at 3:00 am in order to finish my problem sets before the sun comes up. Shawn disagreed. However Dan’s comment that this one tasted “gas-station like” was undeniably a better roast than any we tried all day.

The reveal? Cup A was Connections, Cup B was Starbucks, and Cup C was from Pete’s. Surprised? We were. We had been convinced that Cup C was Starbucks, but I guess it just shows you can’t judge a cup of joe by its label.

Each spot has their own strengths and weaknesses. Pete’s coffee is actually its own brand, and you can buy beans at their café in Wegmans Hall, as well as muffins, croissants, fruit, and other snacks. Their chocolate orange French mocha is a holiday staple, in my opinion. Connections only sells plain black coffee, hot or iced, so if you want a latte or Americano you’re out of luck. However, they do also sell excellent bagels and other meals such as chili and mac and cheese, so if you’re looking for a great lunch spot as well as an iced caffeinated beverage (they also sell tea), then I’d say go for it. Starbucks, despite being my least favorite during the test, has the most variety and customization options, hands down. However, they are also the closest to the center of campus, and therefore the busiest. So I might suggest Tapingo-ing if you get a coffee craving during the hours of 9:00 am and noon, otherwise you might be stuck waiting in line for hours.

Overall, who has the best coffee on campus? It’s hard to say. Even the three of us had trouble coming to a consensus, and the quality is going to vary wildly depending on multitude of factors; from the drink you order to who brews the beans that day. As Shawn said, “the more complex the drink is, the more the individual barista puts into it.” And since we only tested black coffee, if you’re in the market for a decaf latte, an espresso shot or two, or a strawberries n’ creme frappuccino, you might want to do a little bit more research.

My name is Madeleine Fordham, I'm from Amherst, Massachusetts. Right now I am planning to double major in American Sign Language and theatre, with clusters in web design and British history. I also do every extracurricular activity I possibly can, including (but not limited to) ASL Club, Debate Union, TOOP, Todd Theatre, Campus Times, and Quidditch—go UR Thestrals!