Hi, I am a member of the Class of 2021 majoring in neuroscience and minoring in social psychology! I'm from the small town of Orange, Connecticut, and I'm involved in the BCS & Neuroscience Undergraduate Council, Students Helping Honduras, and the Korean American Student Association (KASA). I hope sharing my experiences at UR can help you!

All posts from Jasmine Moon
0

Considering studying abroad? To put it simply: do it! 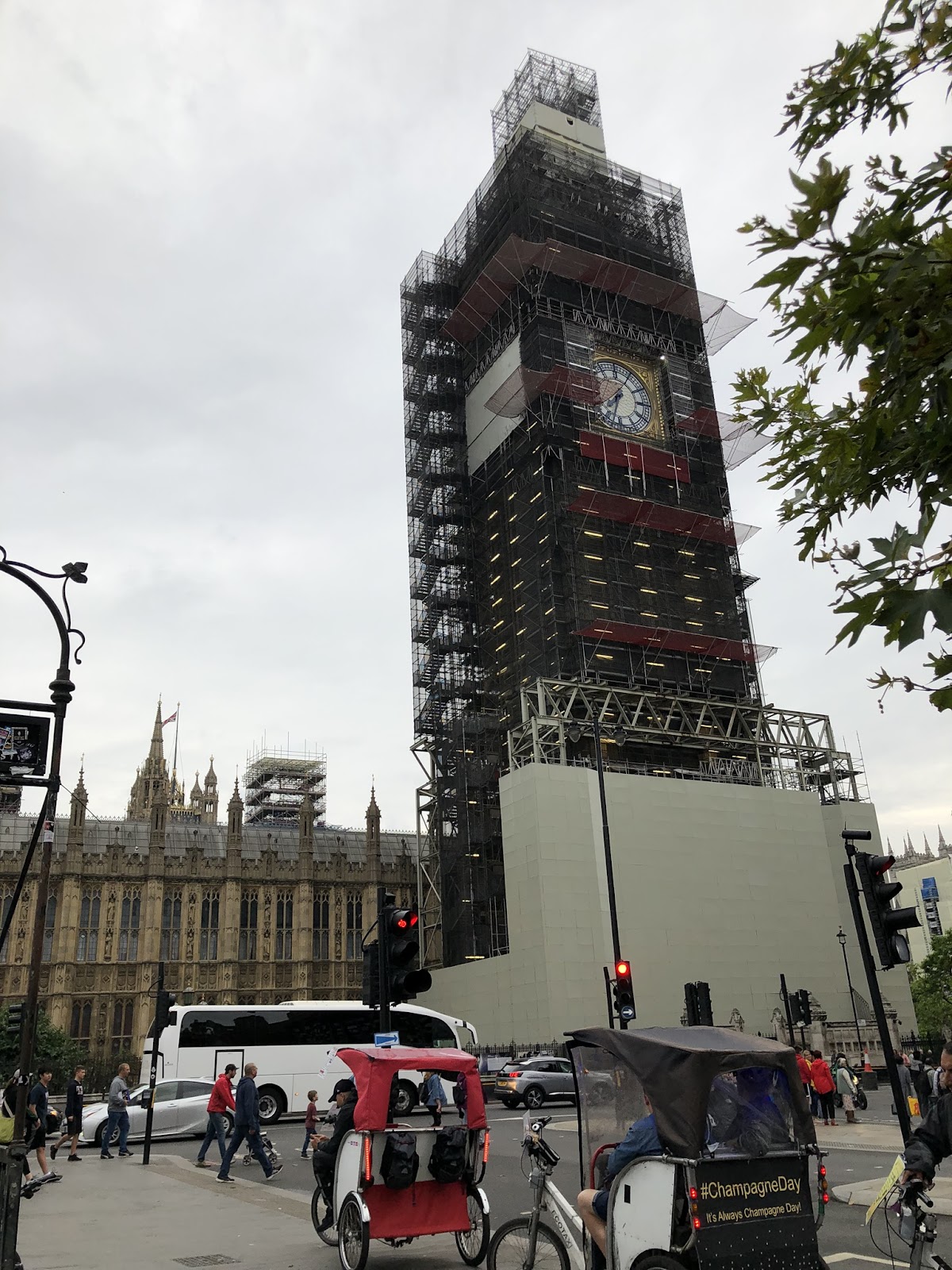 Big Ben was within walking distance from the London Eye. Until 2021, Big Ben is under construction, but thank goodness that the most important clock face is still visible between all the scaffolding!

To study abroad, there are a few requirements set by the University of Rochester. First, you have to complete at least one full academic year at Rochester. Then, you have to be in good standing, both academically and behaviorally. Lastly, you should have declared your major and be making satisfactory progress toward the completion of the major. After confirming all of these requirements, there are loads of UR and non-UR programs to choose from! Studying abroad through UR in the summer is an excellent choice, especially if you want to study a language. However, I wanted to go for literature and writing, so UR pointed me in the direction of CIEE London Global Institute. Perusing CIEE’s website, I came across the CIEE Summer in London Program. 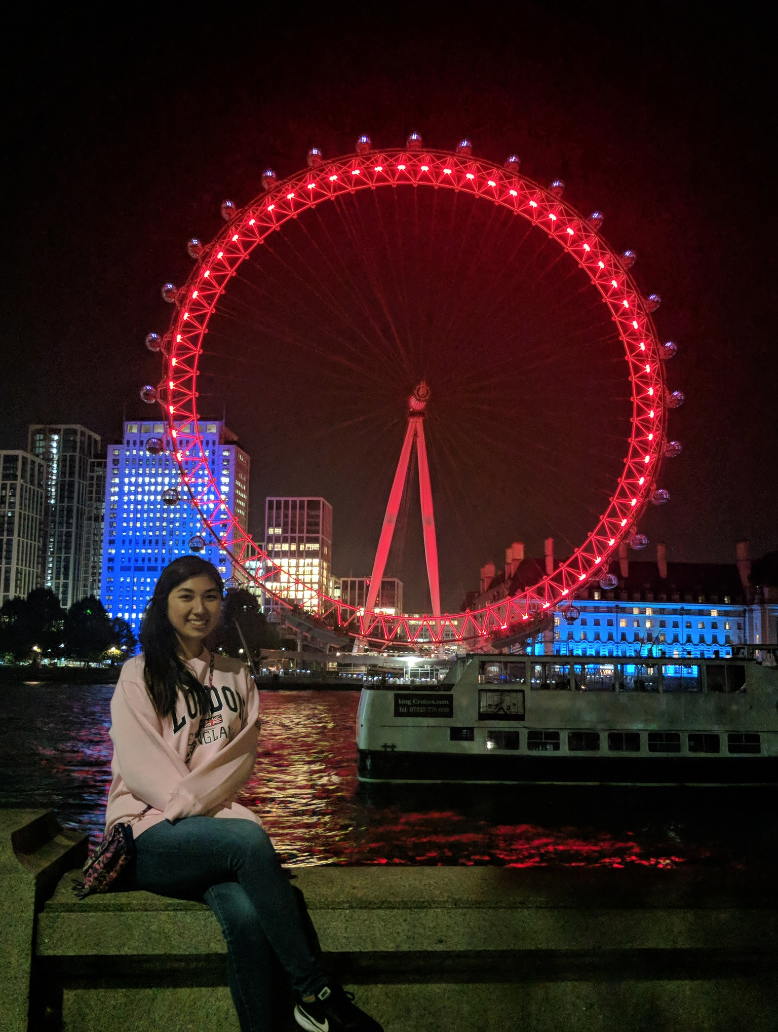 At night, the London Eye is illuminated by colored lights! The colors change every week, between either red, blue, or green!

In my situation, UR would not necessarily be able to financially help because this was a private program. However, CIEE offered their own scholarship opportunities, both merit and need based! They can also provide you with a stipend to cover your flight cost.

When I first arrived at the Heathrow airport in London, a CIEE representative picked all of the study abroad participants up and we went through orientation for the first two days of the program. Classes started soon after: the class was three hours a day for four days a week, which gave us plenty of time to explore London every single day. The class was not as demanding as the college classes in UR, especially since my study abroad course did not have any exams: essays, discussion posts, and in-class participation made up the bulk of the course grade. 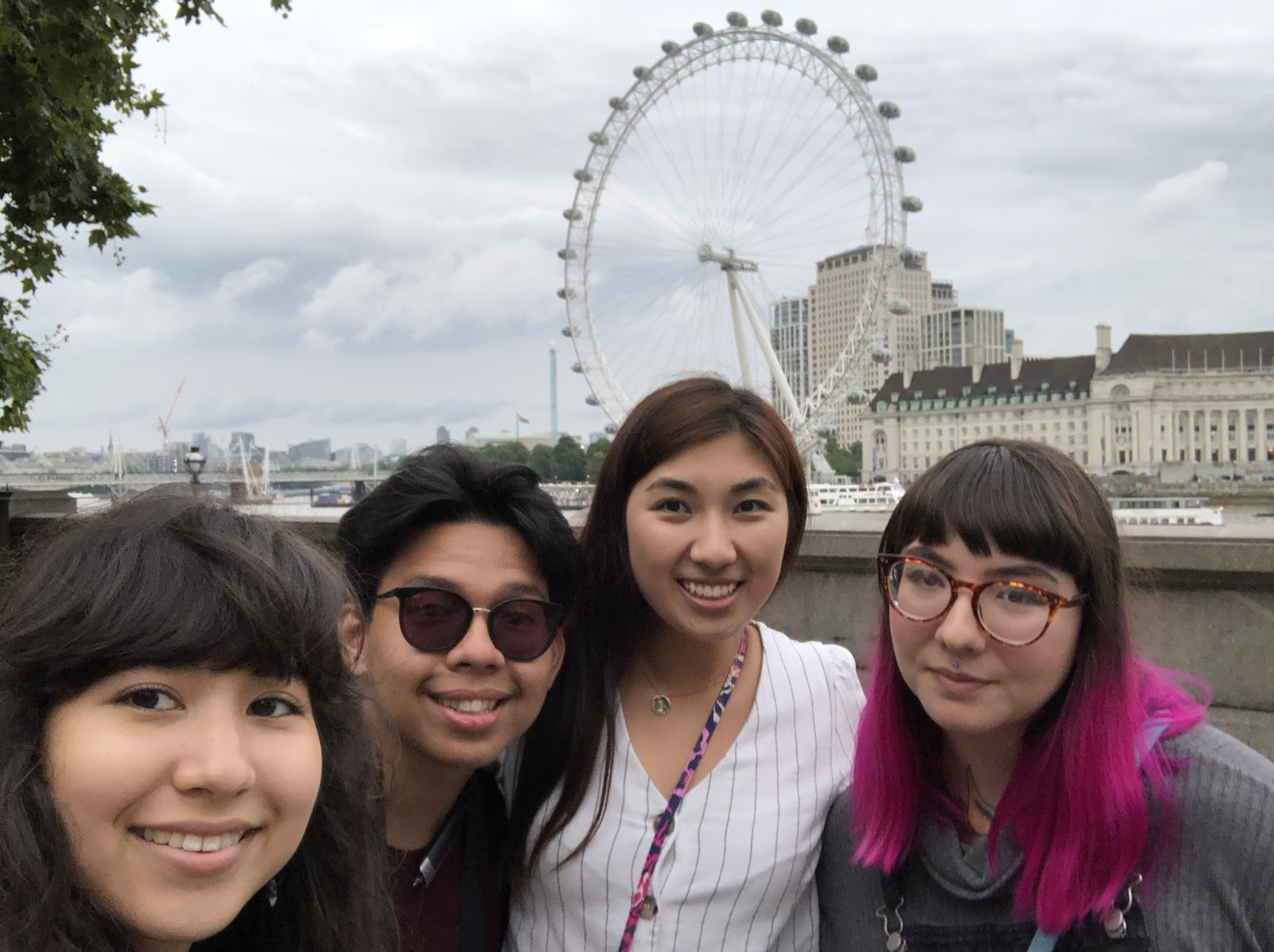 The London Eye during the day time is also a view that you cannot miss! There are lots of places to see the London Eye from different angles so that you can see this landmark from all sides.

Every day after class, I would always try to visit somewhere or see something new. Some of the highlights were roaming inside the state rooms of Buckingham Palace, riding the London Eye, eating traditional fish and chips, sipping British cream tea and scones, touring the Roman Baths and Stonehenge, and hiking up to the Seven Sisters Cliffs in Brighton. 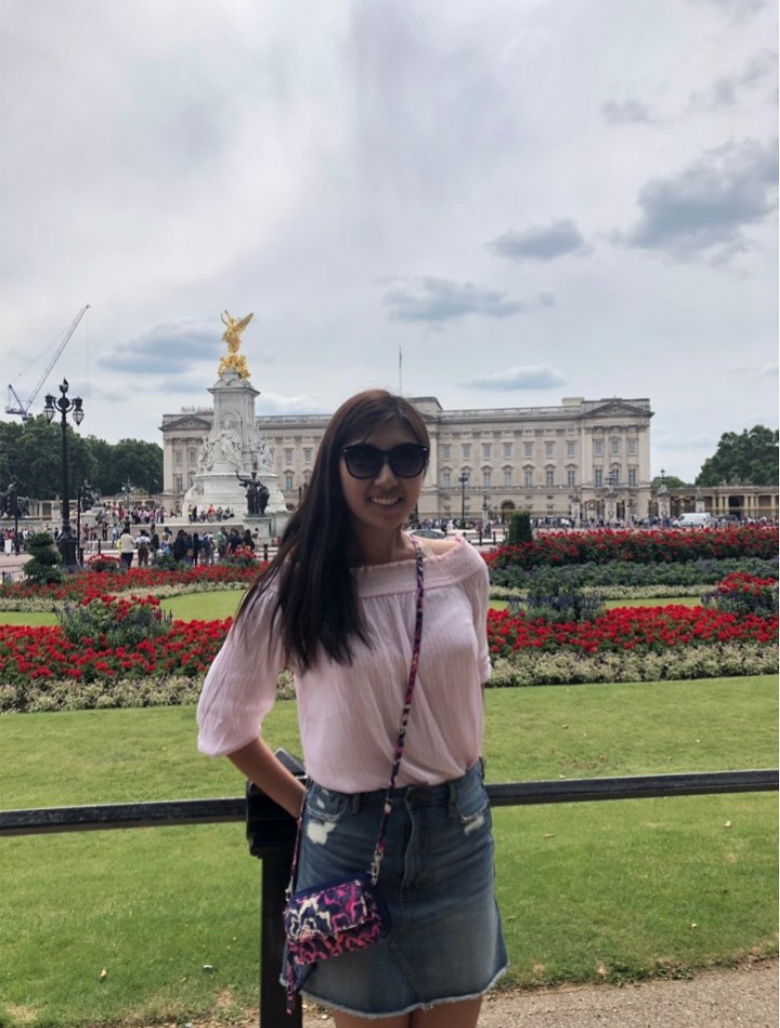 The front of Buckingham Palace. Once inside the gates, it was hard to get a picture by the gate because there were so many people!

Buckingham Palace is home to the British monarchy. Every year, Buckingham palace has special summer openings to the public. Fun fact: this year, 2019, was the 200th year anniversary of Queen Victoria’s birth, so there was a special exhibition regarding how the young queen was able to transform Buckingham Palace into its current glory. Photography of any kind was not allowed in the palace, but the rooms and paintings inside were breathtaking! When visiting the palace, make sure to witness the changing of the guards. It gets very busy however, so be sure to arrive early and to be prepared with your own bottle of water. 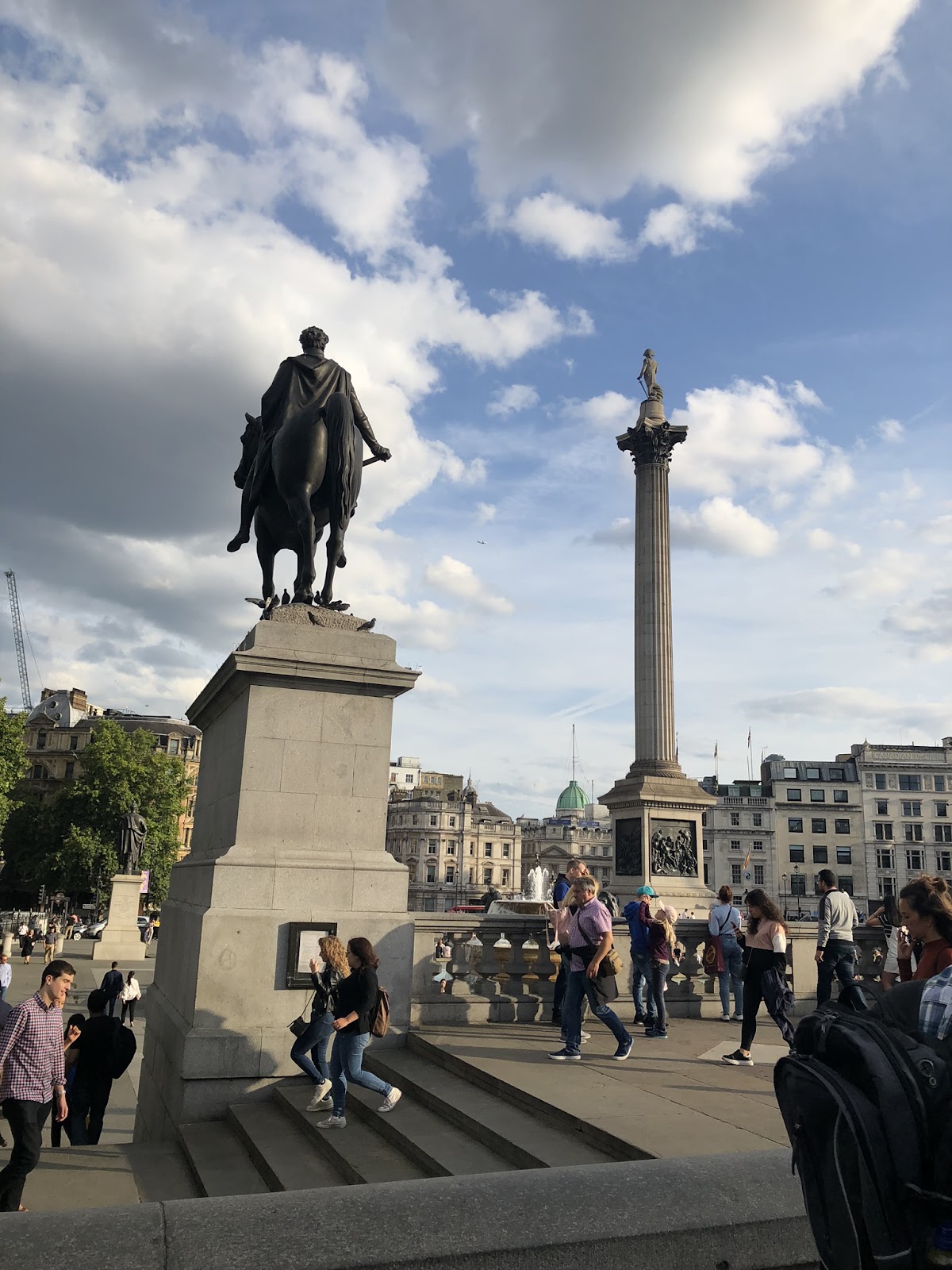 Trafalgar Square was a beautiful area with different statues, street performers, live music, and food. The National Gallery, which I highly recommend, was across from this area.

The London Eye gives a beautiful, bird’s eye view of the River Thames, along with nearby structures such as the Tower of London, the Gherkin (which directly translates to “the Bullet”), and Big Ben. Every year, there are 3.75 million visitors to this attraction, so the London Eye is a must! The London Eye is very close in proximity to many other landmarks (specifically, all the landmarks are just a short walking distance away) such as Big Ben, Trafalgar Square, and the National Gallery, so it’s easy to visit all of these other sights as well. Everything in the area is so pretty, so an impromptu photo shoot with friends is a must. Unfortunately, the Big Ben was under construction during my study abroad trip to London (but I shall be back after Big Ben’s construction is complete ;)). 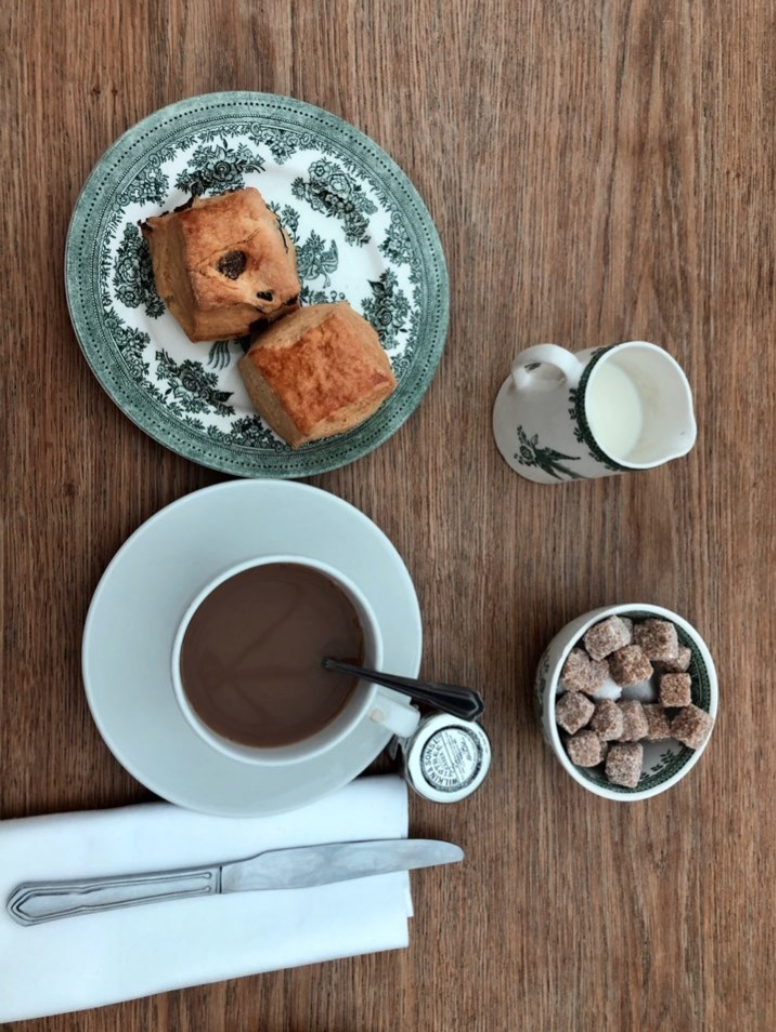 I tried British cream tea and scones at the British Museum. There were two kinds of scones: plain and raisin. Both were delicious and served with both clotted cream and strawberry jam. (The rule is to spread the clotted cream on the scone first, and then spread one layer of the strawberry jam.) For the tea, it was served with milk and sugar cubes (both white sugar and brown sugar). It was a delicious afternoon snack!

One of the first things that I have always known about the United Kingdom are their traditional fish and chips and their British cream tea and scones. The chips (or fries, as we would call them in America) are just simple and mundane, however the fish was scrumptious! Perfectly fried in a light batter, the fish definitely lived up to my expectations. What was even better than the fish and chips though, was the British tea. I sipped the tea, which was always accompanied by a cup of milk and a scone with clotted cream and strawberry jam, and immediately knew I wanted to take this home (I bought three boxes of tea to bring home). I ate both of these multiple times, and I loved them each time! 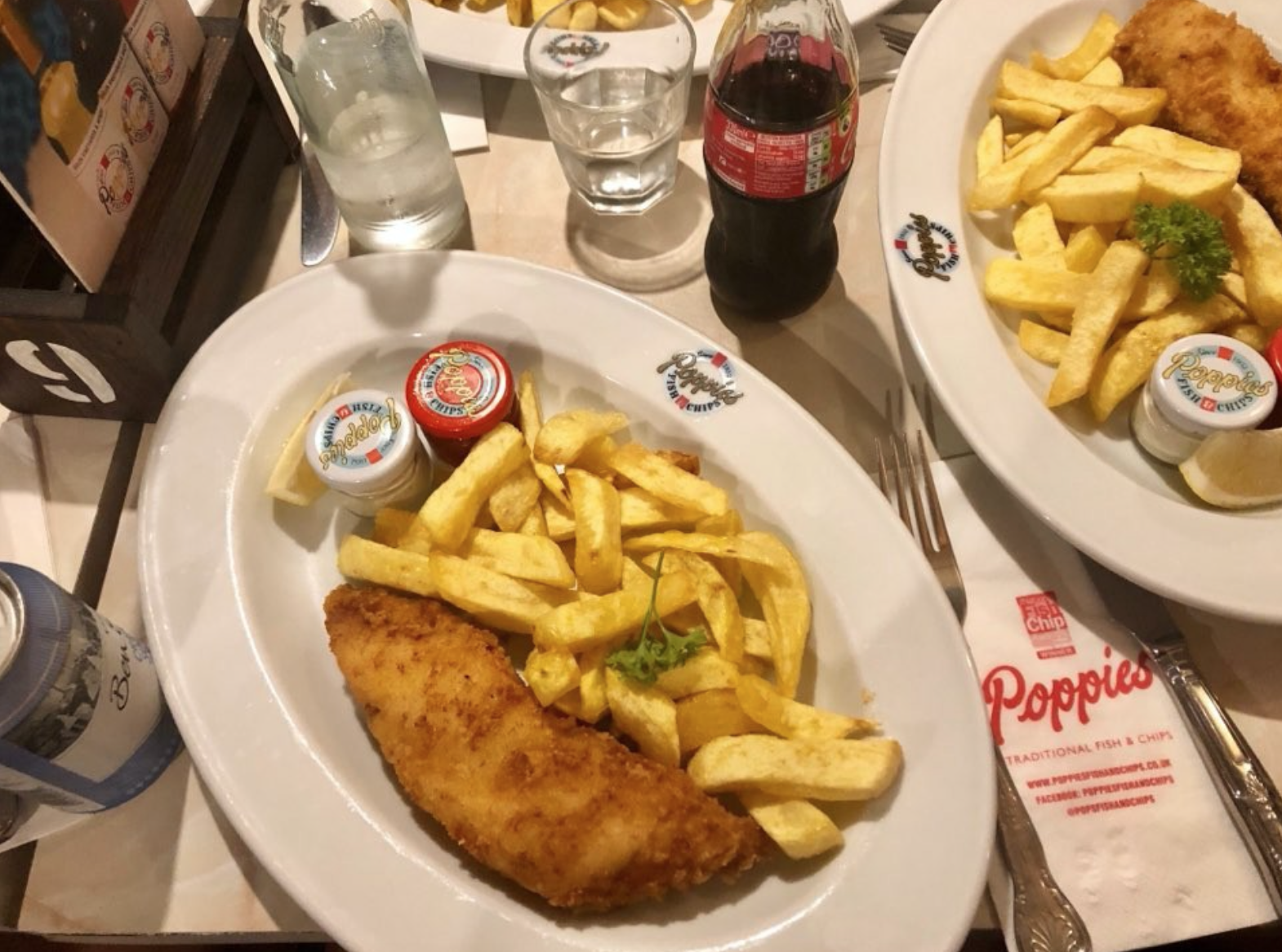 The famous London fish and chips. In my opinion, the chips were not as good as some of the fries in America, however the fish was amazing. Lightly battered and perfectly fried, the fish was also perfectly complemented by the given condiments.

I planned a day trip to Bath, where we toured the Roman Baths and witnessed Stonehenge. Stonehenge is essentially a set of stones around 13 feet high formed into a ring. The interesting thing is that this formation of the stones were built about 2,000 years ago. The Roman Baths were used by the Romans for public bathing. Fun fact: the Roman Baths are now currently beneath our regular street level! 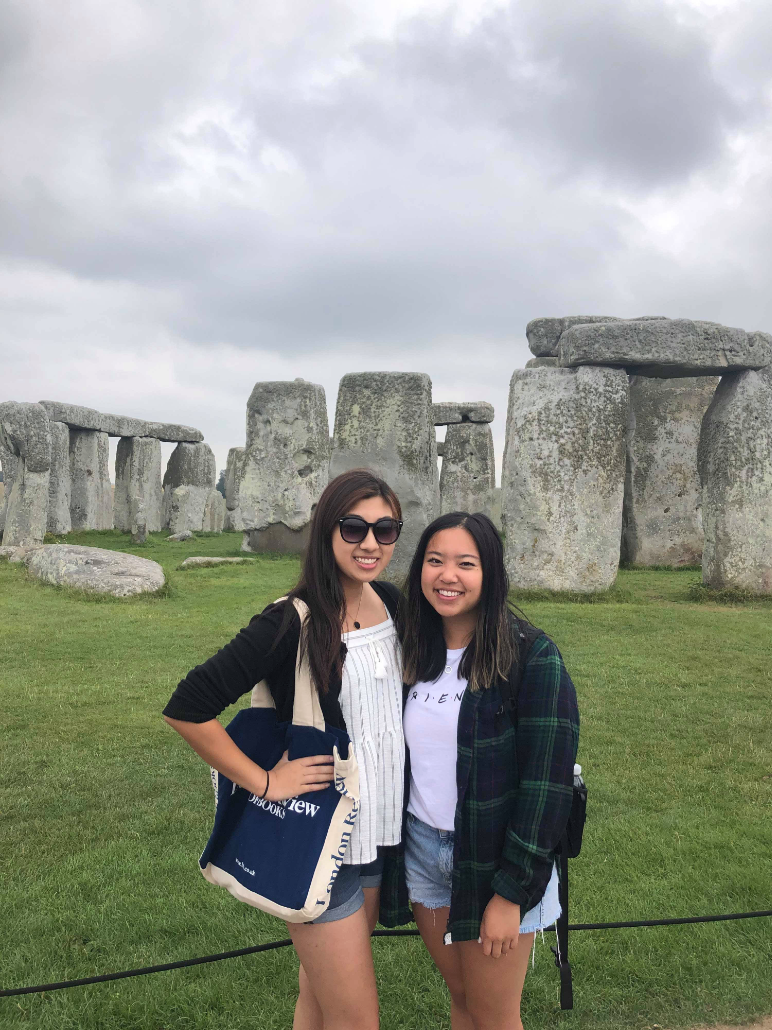 Went to Stonehenge to see the famous ring of stones. The ropes were also not too far away from the stones, so we got a great view.

Last, the Seven Sisters Cliffs near Brighton was an amazing view that was definitely worth the hike. Brighton is in the southern coast of England, so it was a 2.5 hour train ride. There weren’t a ton of people so it wasn’t crowded, and you would be able to have an amazing view at the cliff’s edge. One interesting fact was that there was no sand on these beaches; all of the sand that you would expect was completely replaced by rocks the size of your palm! It was really pretty, but definitely did not do our shoes any favors…

Hi, I am a member of the Class of 2021 majoring in neuroscience and minoring in social psychology! I'm from the small town of Orange, Connecticut, and I'm involved in the BCS & Neuroscience Undergraduate Council, Students Helping Honduras, and the Korean American Student Association (KASA). I hope sharing my experiences at UR can help you!