by Sabrina Westgate, Class of 2019

From October 17–20, twelve members of the University of Rochester’s Chapter of the Society of Women Engineers headed to Minneapolis, Minnesota for the 2018 National SWE Conference. Our chapter has attended the SWE National Conference for the past few years, and as always, it was amazing. Many of the attendees had never been to a national conference before, and many had their first internship and job interviews while there. A few were even offered jobs on the spot!  We also got to eat some delicious food and see some of the sites surrounding the conference in Minneapolis, including going to the Mall of America!

Following are the testimonies of conference goers, who explain their main takeaways from the conference.

Being in my first year and majoring in biomedical engineering, I was contemplating whether I should attend the WE18 conference, the largest conference for Women in STEM. The cost of the trip was also a factor. However, with the gracious help of our sponsors, I was able to afford the trip and I decided to attend. This was one of the best decisions of my life.

I would have never learned as much staying in Rochester as I did at the conference. Recruiters from the career fair were surprised to see a first year student walking around in a business suit giving out resumes to companies she aspires to be a part of. However, those recruiters also asserted my decision of attending this conference when they accepted my resume and signed me up for internships this summer! 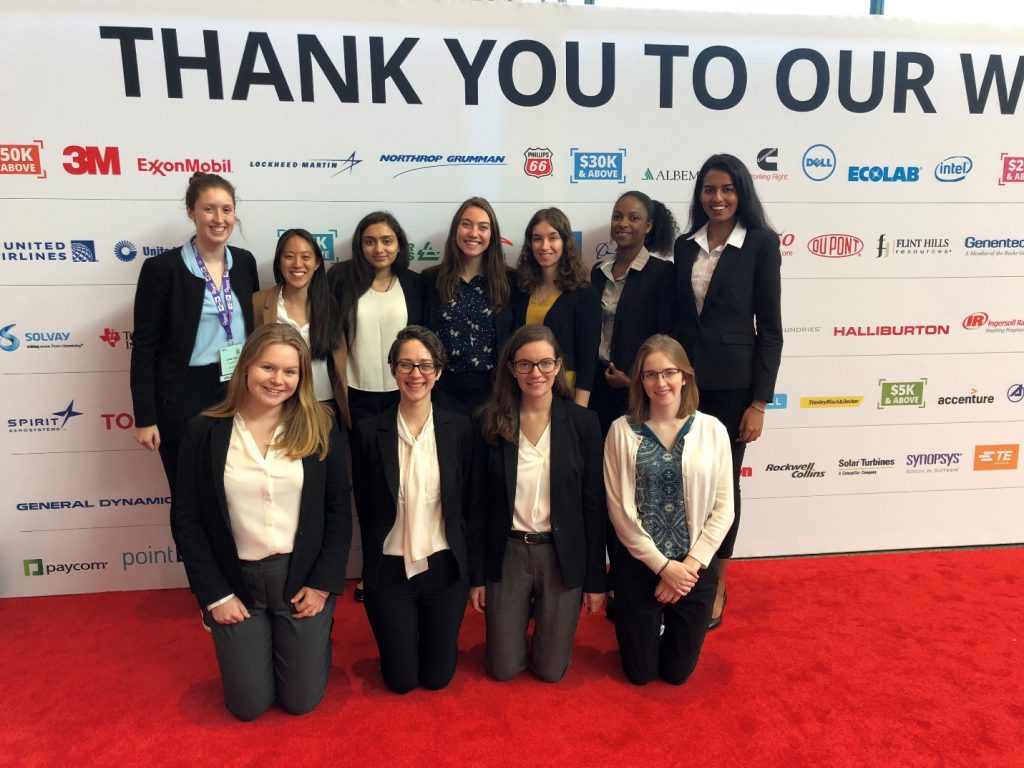 As this was my first career fair, I had a lot to learn and master. Pitching myself to any employer has always been a challenge for me. But after speaking to over fifteen of the largest biotech companies in the United States, I believe that I have picked up on quite a few tips and tricks!

However, the most important aspect of this conference was looking at all these confident women, ranging from all ages, come out to represent the family of women engineers. We may be in the 21st century, but many of these women still face hardships in the place they love: their home and their workplace. Just hearing these women talk in seminars inspired me and made me realize that I did not have to choose between being a woman and being an engineer. Rather, I am and can be a woman engineer.

Through the conference I was able to gain exposure to a different side of engineering not seen in the classroom. I had the opportunity to hear women in the field speak on topics including career fairs and their entrance into the industry.  I was also able to speak with over twenty-five companies during the career fair. From this I learned more about how a role in engineering varies from company to company and was able to better understand what I want to do this summer and when I graduate from the University.

I was honored to be able to go to my first SWE conference this year. It was truly inspiring and motivating to see all the women pursuing and working in an engineering field. The job fair was a great experience and led me to meet many companies that I was interested in. I was able to have my first interview and gain confidence in speaking with companies and potential employers. 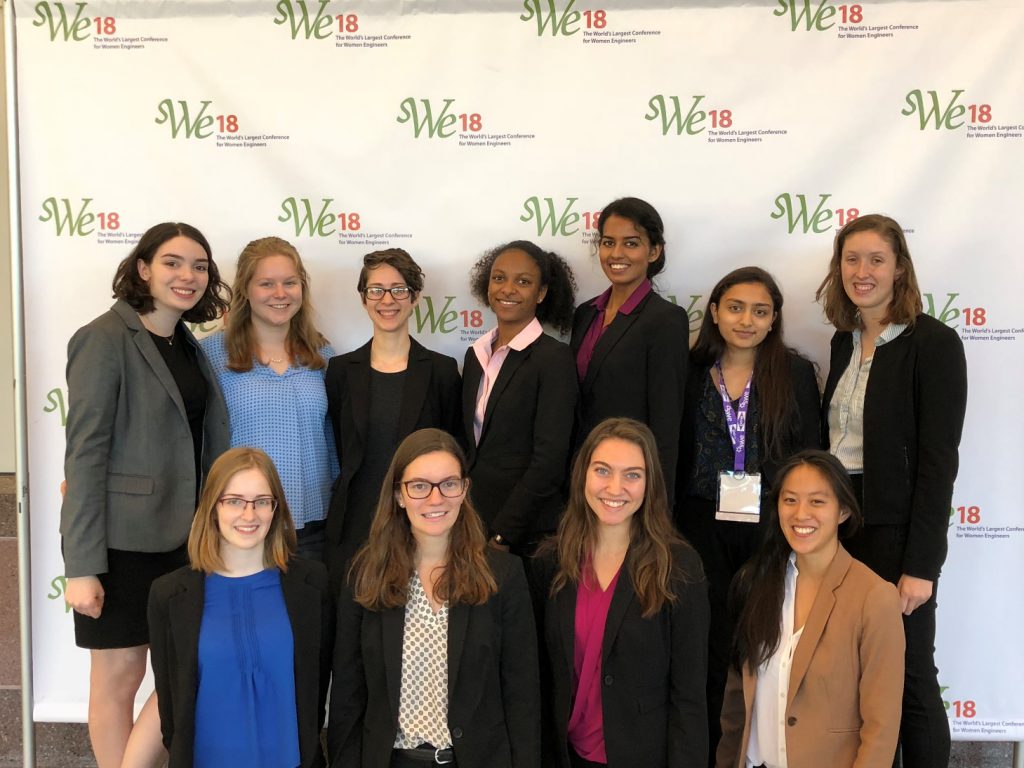 I had the opportunity to listen to amazing speakers and network with dozens of employers and professionals during networking events, including a career fair of over 300 companies. The opening keynote speaker, Cindy Kent, gave a wonderful introduction to the event by sharing some of her personal and professional experiences in engineering. I also listened in on a panel of women who work for NASA, and their stories and advice were absolutely inspiring. Throughout the career fair, I talked to over twenty different companies, which I hope will lead to an internship offer for next summer. Interacting with recruiters in person was definitely a huge advantage, as several of them gave me personal contact information so that I can keep in touch throughout the application and recruiting process. Overall, the conference was a wonderful opportunity for professional development. It was inspiring and empowering to be surrounded by so many enthusiastic and accomplished women in engineering.

The conference was what I can only describe as a life-changing experience. It was a great networking opportunity as I had the chance to talk to representatives from some of the largest companies. Aside from getting to speak to people from these companies, it was nice to see all the other women engineers and comforting to know that I am not alone in my field. There were many interesting talks where people told their stories of success. It was interesting to hear that everyone had their own unique story and what worked for one may not work for the other. There were also talks on resume building and interview tips, directly from Human Resource personnel, most of which were new to me and I definitely will not forget. All in all it was a very eye-opening experience and I am grateful that I had the opportunity to attend this event. 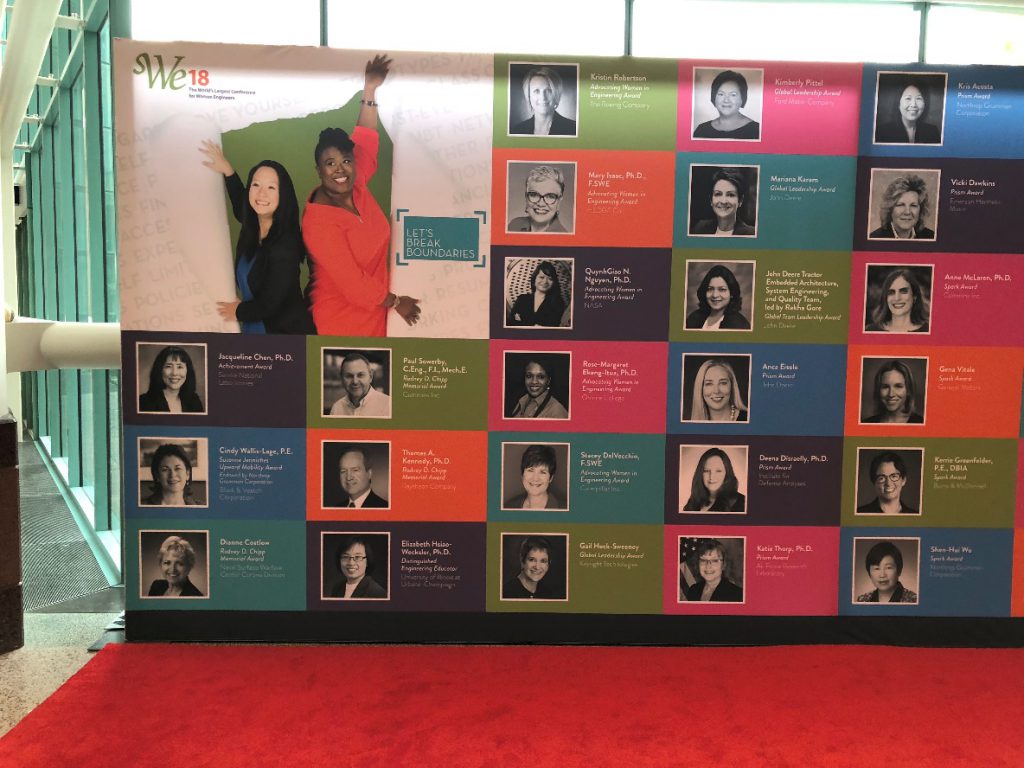 The theme of the conference was “Let’s Break Boundaries”

I am thankful for the opportunity to attend the SWE National Conference. It allowed me to speak to and network with recruiters from many companies. As I spoke to recruiters I learned more about the different types of job opportunities there were and what would be a good fit based on my interests. I learned more about the hiring process of the companies and the roles responsibilities the engineers at these companies had. I especially enjoyed the hospitality suites were I was able to speak one on one with many people at specific companies about their personal experiences and projects they worked on. It was a great way to get a better sense of the companies and the types of people I could potentially be working with.

Going into my senior year at the University of Rochester, I had never been to a professional conference, nor was I an active member of the campus chapter of the Society of Women Engineers. Because I wanted to become more involved in the club, and because it was my last chance to go to the conference as an undergraduate, I filled out the application to attend the 2018 conference spontaneously in September. I can say, without a doubt, that this choice was one of the best decisions I have made in college. 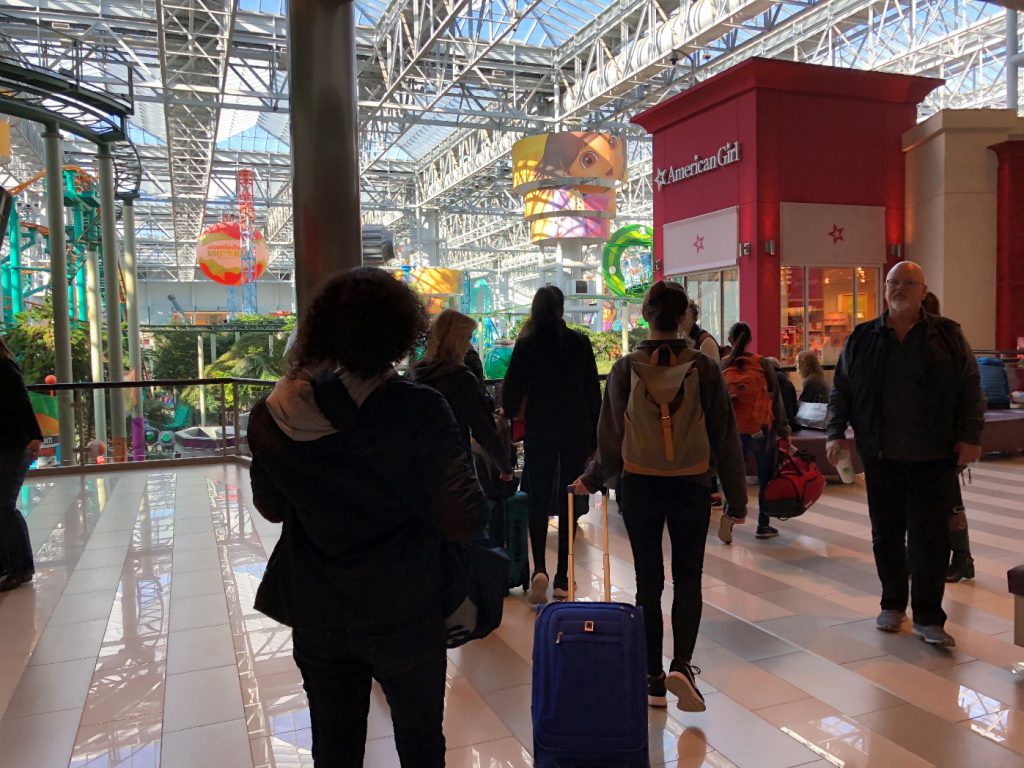 While waiting for the plane to return home on the last day, we stopped at the Mall of America for lunch.

Coming out of a month that was a flurry of work, midterms, and job applications, I stepped into the Minneapolis Convention Center with only a list of companies that I had jotted down quickly the night before. They were big names—Boeing, Honeywell, General Electric, NASA, and other behemoths—I hadn’t even had time to look into smaller companies or do research on what the different firms were even looking for. The first day of the conference, I attended several wonderful talks, one being a Ford session hosted by the company’s youngest female vice-president, Lisa Drake, who had worked her way up to the position from an entry-level engineering role. As she described her experiences, she said this: “I never thought I’d make it to my level. When I started, I was excited to just be a project manager. So whatever your dream is, double it.” These words stuck with me throughout the conference.

Once the talk ended, I stepped into the career fair and was immediately overwhelmed. I took a deep breath, called my mother for reassurance, and then stepped up to a firm at the top of my list and at the front of the room—Boeing. I spoke briefly with a representative, handed her my resume, and to my shock, she invited me to their speed interviews later that night. I was floored that such an incredible company, one so often in the news, would be even remotely interested in me. As a woman in engineering who often questioned if she belonged in the industry, this single interaction completely changed how I viewed myself. This shock continued throughout the day, and I was lucky enough to receive interview invitations for Lockheed Martin, GE, and Accenture, as well as a second round at Boeing.

I’ll fast forward now to about a week after the conference—I’ve been honored to receive full-time offers from Boeing and Lockheed Martin, as well as a final round interview with Accenture. I can confidently say I wouldn’t have been able to interview with these incredible firms, let alone gain offers from them, if not for attending the SWE conference. But beyond the career opportunities, attending SWE tapped into something deeper within me, something I had struggled with so much as a female engineer—confidence. Before SWE, I had been going through recruiting for management consulting firms, I didn’t think there was a place for me in engineering. Attending SWE, meeting so many amazing women, and being acknowledged by these companies allowed me to double my dreams, just as Lisa Drake had encouraged the women at her session to do. 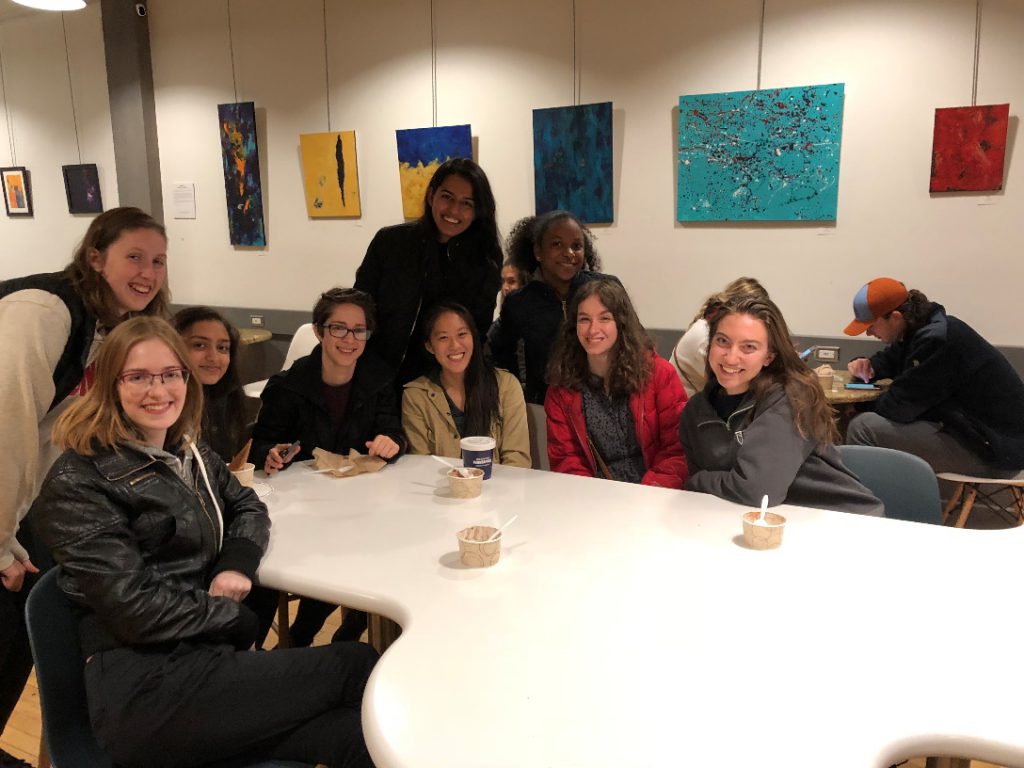 I am so thankful for the campus chapter of SWE, the Hajim school, the Mechanical Engineering department, especially the department chair, John Lambropoulos, for organizing the conference and sponsoring my travel, as  well as the travel of the other attendees. This opportunity has been truly life-changing, that is no exaggeration, and I have been actively encouraging my peers to consider attending the SWE conference or others in the future.