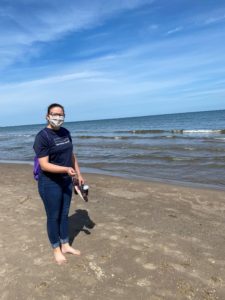 We found some rocks to skip

In an effort to see more of the sights around Rochester before I graduate, I took advantage of one of the nice September Saturdays to go to Lake Ontario with a friend. We were going to go for a walk at Corbett’s Glen before heading to the beach, but the parking lot was full, so we couldn’t. Instead, we walked along the Durand Eastman Park Trail for a while. There were several dogs on the trail, which we enjoyed from a distance. That’s one thing that changes for many people when they’re in college: increased excitement at seeing animals due to lack of exposure during the school year. On the walk back to my friend’s car, we strolled along the beach, shoes in hand. I waded into the water, which was nice on a hot day.

We retrieved our things from her car and got situated on the beach. Although it was warm out, it was also quite windy, so we decided to not put on our swimsuits. I brought a salad and bottle of kombucha from campus, which I ate for lunch. 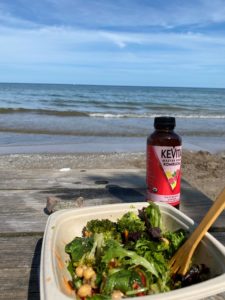 I laid on a log and my friend sat at a picnic bench to read. I started the Harry Potter series during quarantine, so that was my book of choice. My friend had a book she needed to read for a class, so that’s what she read. After a little while, we decided to head back to campus. It was really nice to get off campus and spend some time on the beach enjoying the sun and waves. Since a few of my friends have cars this year, hopefully I’ll get more opportunities to check out upstate New York!