The time is here, the Grace Hopper Celebration! Grace Hopper is an annual conference aimed towards women in computer science. The University of Rochester Computer Science and Data Science Department sponsors a group of women to attend every year. This year, I was fortunate to be sponsored to attend.

Overall, Grace Hopper was more than what I expected. It was absolutely amazing.  For the first time in my life, I was able to meet and talk with queer women of color from across the world that were involved in computer science. I honestly did not realize the impact that would have on me, but it dramatically influenced my relationship with computer science as a whole. Despite earning high grades in my computer science classes, being a TA, being involved in research in computer science, etc., I had very little confidence in my computer science skills. I always felt that I did not belong in the field. Yet, oddly enough, I never made the connection between my social identity and my feelings. Yet, immediately following Grace Hopper, I began to seriously consider getting a master’s or PhD in computer science, something that I never would have considered if I did not attend. I also began reading more academic papers in artificial intelligence and attending my professors’ office hours. My own experience demonstrates the significant impact Grace Hopper can make on one’s career path. 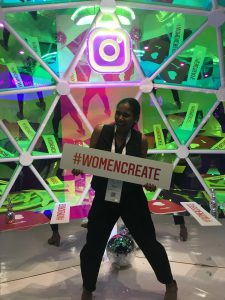 Grace Hopper also demonstrated the necessity of empowering women in STEM. Every presentation showed the effect of increasing diversity. For instance, AI devices such as Siri or Alexa (from Amazon), cannot recognize the voices of people that have speech impairments or thick accents, because it is standardized to a native, able-bodied, English speaker. Another example can be seen in how we test machines, like crash test dummies, which are standardized to a well-built man. The dummy may survive a crash, but there would most likely be a significant difference if the dummy was a petite woman.

Even stepping outside of the field, computer science holds so much potential to change the world. Within our cities, there are thousands of people that are lack bare necessities: clean water, basic education, grocery stores, etc. Hence, diversity not only adds an extra dimension, but leads to new projects and innovation. There needs to be more people that care about these issues enough to bring them to light. By no means is technology the end-all, be-all solution, as these projects could easily turn problematic and detrimental. But there is this potential, and that’s what Grace Hopper has shown me.