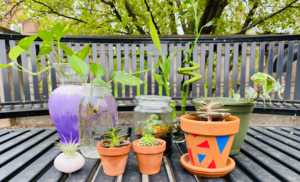 There were a lot of plant giveaways this year, and you can bet I went to each and every one of them. Shoutout to Wilson Commons Student Activities for being the source of most of my new plant friends. Join me for a journey through my 2020-2021 academic year — with plants!

Lucy is the first plant I got this year after the person I’d asked to watch my previous plants during the spring semester and summer told me he’d lost them and I had no plants. During Yellowjacket Weekend at the beginning of the fall semester, there was a lucky bamboo giveaway. Eager to replenish my dorm’s greenery, I immediately registered.

Near Halloween, Wilson Commons Student Activities collaborated with Rochester Brainery to give students the opportunity to make their own spooky terrarium. I had low hopes because I’d attempted a self-sustaining terrarium the previous year and it didn’t work, but Jack is still going strong!

In November, there was a UR Late Night event where we got to choose from an assortment of pots and sizable plants. I spent quite a while trying to pick my plant because so many were pretty, but ended up selecting the ivy that got named Ivy Winters (RPDR fans, you know what I’m talking about). We had a rough patch with brown edges on the leaves, but I think I’ve learned how to take care of her now. 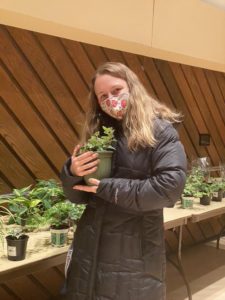 Simon and Garfunkel the Mini Succulents

During Winterfest Weekend, there was another plant giveaway, which is where I got Simon. A couple of weeks later, there was a “Pajama Pinterest Party” with leftover take-and-makes from previous weeks, including some succulents, which is how I got Garfunkel. We had the opportunity to paint the little terra cotta pots, but not wanting to run the risk of besmirching the pot with a bad paint job, I left it plain.

I’ve lived on GreenSpace (special interest housing for the sustainability-minded) for three years and every year has somehow involved pothos. This year, our RA did a paint-and-propogation hall program in which we painted jars to put our pothos propogations in. Later, we partnered with a freshman RA to do a propogation hall program for her hall. For recruitment week this semester, we did a pothos giveaway. Vincent is from my RA’s hall program and earned his name because of how prolifically he has grown since September. I have another pothos, but I don’t recall which event I got it at and a name hasn’t yet come to me.

I got Jade on Dandelion Day and she might just be my favorite plant. The name is misleading because she’s really just an air plant in a shell so she looks like a jellyfish. Since Dandelion Day was so cold this year, this plant might be my fondest memory of the day.

I just got Echie (pronounced eckee) from a Neighboorhood Ambassador program. Although I’m living on-campus, I follow UofR Off-Campus Housing on Instagram because they do some cool giveaways and saw that there was a paint-a-pot giveaway, so of course I signed up. Once I sent in a picture of my painted pot, I got a plant to put in it.

Not all of the plants I acquired this year made it. I got a succulent from an EcoRep’s hall program and made a kokedama with Rochester Brainery, but both died over Winter Break. 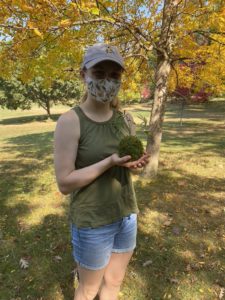 Me and my kokedama

Now hopefully these guys will survive over the summer in somebody else’s care since I can’t bring them home to Seattle!